OpenCity is an ongoing project of artistic research that applies methodologies of site and sound walking to interrogate our experience of change, in particular in relation to city life. Past urban walks have taken their thematic cues from each city’s distinctive concerns, such as Stoke-on-Trent’s post-industrial heritage or Berlin’s gentrification.

OpenCity’s application of sound walking provokes critique through the disruption of the quotidian and by engendering a prolonged encounter with aspects of the city that might otherwise remain overlooked. During OpenCity sound walks a group is typically led on a predetermined route by the artist, each participant provided with an Ipod loaded with a soundtrack comprised of sounds recorded in situ and elsewhere. These contrapuntal sounds are interwoven with what can be heard in the here and now to heighten the experience of moving through a city.

An important aspect of OpenCity’s methodology lies in working with inhabitants of the cities in which the project is located, each sound walk generating a palimpsest of associations and recorded material, captured by and reflecting the diversity of perspectives among the group.

In this brief paper I shall use the sound walk OpenCity Aix, performed at the Mobile Audio Fest, November 2015, to reflect upon the French city’s urbanism and that of visionary artist Victor Vasarely, whose Foundation, built on the periphery of Aix in 1976, comprised the endpoint of the walk.

Aix-en-Provence is a city of conspicuous wealth, its medieval centre dominated by numerous independent designer shops and eating places. The wider city gives an impression somewhat typical of French urban planning, with strictly differentiated zones of activity. Such zones and the liminal transitions between them provide the underlying structure of any OpenCity walk, and the identification of a productive route through and between them is a vital first step. Speculative research and extensive walking in Aix led to the decision to begin the sound walk in the centre-ville, passing through its commercial, cultural and housing quartiers, before taking a footbridge across the autoroute to emerge beside the Vasarely Foundation. A section of the route of the Aix’s medieval Fete Dieu procession was also incorporated into the walk, inspired by an exhibit of wooden puppet figures in the city’s Musée Estienne de Saint-Jean.

With the route established, the process of gathering and assembling sounds along its length began, with the close involvement of students from art schools in Aix and Marseille. The use of binaural microphones allows one to explore the spatiality of recordings whilst shotgun microphones enable the apparent magnification of sounds in relation to their environment, thus a visually distant fountain may be brought into the auditory foreground. 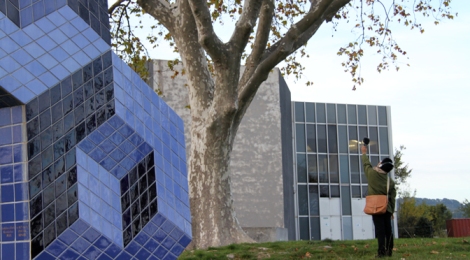 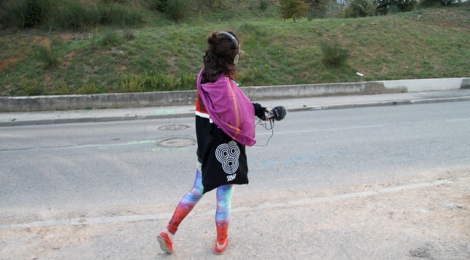 Judicious manipulation in the editing suite produces a layered soundtrack specific to a particular route through a series of locations. The experience of listening to such recordings by a synchronized group as they move through the city can generate an augmented sense of reality, of elements that may or may not be there. In Aix these included varying intensities of traffic, footsteps, snatches of film score, the voices of passers-by and street traders, fountains (for which the city is famed), church bells, buskers, birdsong, as well as dramatic silences. These were interspersed with comments by Pierre, a lifelong local resident who provided his own perspective on the way the city and its soundscape had changed since his youth.

During its composition and performance, moving ever outwards from the centre to the edgelands, the sound walk reflected upon the value systems at play behind the city’s planning and management. That which could be considered of greatest commercial benefit, visual appeal, power and importance tends to be located centrally, whereas the periphery is home to the marginalized. The touristic centre ville is largely pedestrianised whilst beyond it the traffic becomes increasingly heavy and its noise more continuous. The relative cleanliness of the central streets (one can speculate whether waste is recycled or simply ends up in landfill beyond the city boundary) is in sharp contrast to the rubbish-strewn abjection immediately beyond the autoroute, where a squatter camp has been established. 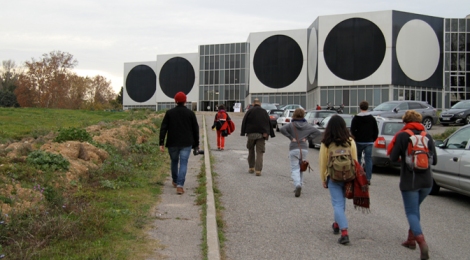 An exception to this rule is the Vasarely Foundation, located immediately beyond the autoroute, the artist’s gift to the city and an extraordinary building viewed either externally or from within. Writing from a utopian 1970s perspective Victor Vasarely wrote:

We must fight against the visual pollution caused by the massive apartment buildings built in the 1960s which were inhuman and devoid of life. We must help people escape the dullness of their daily routines.

Vasarely hoped for the “Cité polychrome du Bonheur” (“Polychromatic City of Happiness”) to become a base from which urban planners, architects, artists and the wider community would co-construct the “city of tomorrow”. Sad to say his vision never materialized and since his death in 1997 the Foundation and its surroundings have fallen into disrepair, although attempts have begun to restore the building and grounds to their former glory.

The sound walk OpenCity Aix was experienced on three occasions across two days of the Mobile Audio Fest, and over its 90 minutes duration it diverted groups of up to 20 participants from their habitual pathways. Its measured pace, just slow enough to feel uncomfortable, brought about a confrontation with the city’s unequal distribution of wealth, and unsustainable urbanism. A moment of ironic significance occurred as the group passed beside the squatter camp at the point on the recording when Pierre described the wealthy of past centuries choosing to construct their homes outside the city. 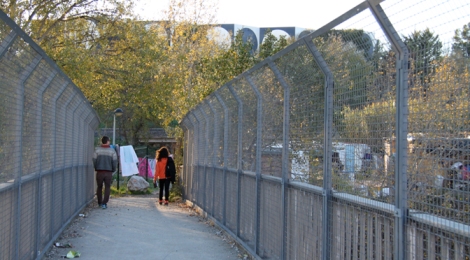 To conclude, appropriately, with Victor Vasarely…

Not only are the tangible elements of building design (comfort, hygiene, space, light) important, but the intangible, mental elements must also be taken into consideration in the design of a city – these are just as crucial to our health as oxygen, vitamins or even love.